I’ve heard that it’s the hottest spot north of Havana, but unfortunately the Copacabana that Harry and I visited this weekend was incredibly cold! It’s hard to believe that I was seeing frozen car windows and frost on the ground when barely a week ago I was lounging topless on the sundeck of a boat.

As I write this I am on the bus from Copacabana heading back to La Paz, enjoying some beautiful vistas of Lake Titicaca, the largest high-altitude lake in the world. And believe me when I say this lake is big; you can look at photos and geek out with the statistics, but they won’t prepare you for the moment when you see it for the first time and have to convince yourself that you’re standing on the edge of a lake, not the shore of an ocean.

During our short stay in Copacabana (little more than a weekend, really) we had three main highlights: a day trip Isla del Sol (the Island of the Sun); a short jaunt into Peru; and a semi-unexpected meet-up with three more Guyana volunteers (Oli, Natalie and Charlotte).

On our first full day in Copa we took a day trip to one of the islands in Lake Titicaca – Isla del Sol. Our boat took us to the northern end of the island where we visited some Inca ruins and enjoyed incredible views (and where I took my third planking photo).

We then started on a 2½ hour hike to the southern end of the island, enjoying yet more awe-inspiring views along the way. The hike isn’t exactly a walk in the park, but it’s not impossible and I would strongly recommend it to anyone visiting the island.

Once we reached the southern end we enjoyed more examples of Inca history, including the famous Inca Staircase. Of course we climbed to the top to see it properly, which is something I would also recommend. I would, however, offer this token of advice: if you’ve just finished a 2½ hour hike, and your lungs are battling for oxygen at 12,500 feet above sea level, do not attempt to run up the stairs. You will regret it. We did.

After we finished sightseeing the boat returned us to the mainland and we went in search of a well-earned dinner.

All together the day cost about 80Bs for the boat, guide, entrance fees, food, etc., which is about £8 in the UK. To anyone in Copa (the Bolivian one, obviously) I would recommend visiting this island. 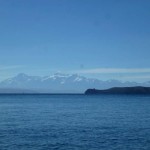 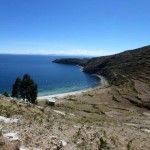 One of Isla del Sol’s beaches 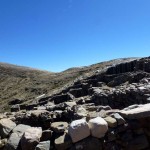 Ruins of an Inca labyrinth 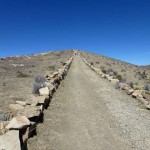 The hike from north to south (not trick photography; it really is very steep!) 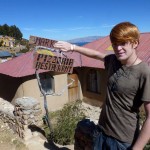 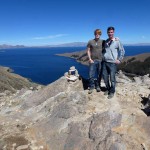 Hard to believe this isn’t just a postcard I photocopied…

On our last day in Copa we met up with three more PTVs: Oli, Natalie and Charlotte. They were en route from Peru and will be following us into La Paz in a few days. We met them for only an evening, which was spent indulging in a proper* meal, using a cafe/bar to cower from the cold outside and play many rounds of President and Beggar**, and then braving the streets once more for a nearly-midnight-snack from one of the many street vendors.

* Truth be told, Harry and I have existed largely on snack food and street vendors since we arrived in Copa!

** I reigned supreme as El Presidente for quite some time 😀