Our final Bolivia excursion was a 3-day/2-night tour of Salar de Uyuni (the largest salt flat in the world) and the surrounding areas.

I’ll be writing this post as I go along,however I suspect I won’t write too much – Uyuni is a place where pictures are worth way more than the standard thousand words.

Having taken an overnight bus from La Paz we arrived in Uyuni, set off to find the tour office, and promptly got lost. When we eventually did locate the Red Planet offices we checked in and waited for our tour to set off at 11am… ish. While we waited we spoke to other travellers and enjoyed a tasty, healthy breakfast (no, really!)

Our group consisted of 10 people split between two 4x4s – Harry and myself, two Germans, two Italians, two Thais and two Norwegians. The first stop – barely five minutes outside of Uyuni – was the train graveyard, followed by a visit to a salt processing plant and a museum, a fantastic lunch in a building made of salt, several stops on the salt flats themselves to take many photos, a hike on a cactus-covered “island”, and then our hotel for the evening (which was also made of salt). 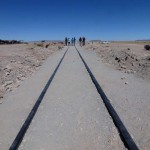 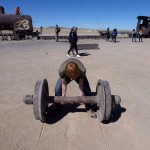 Feeling strong at the train graveyard 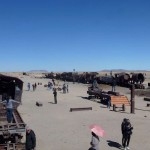 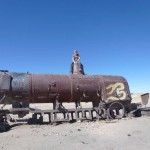 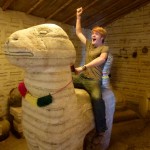 Alpacca, made of salt 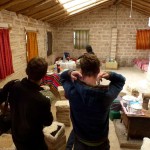 Dining room, also made of salt 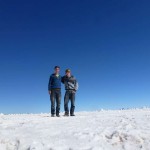 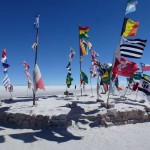 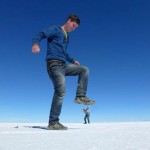 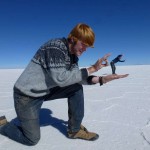 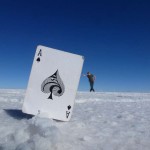 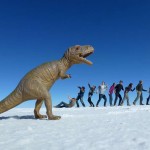 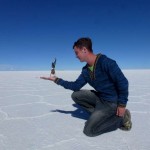 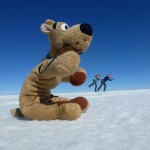 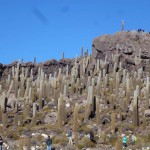 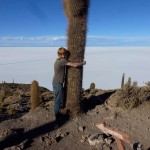 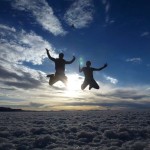 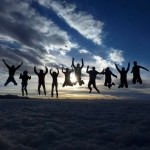 (If you’re wondering about the buildings made of salt… yes, the walls do taste like salt; no, you shouldn’t lick one to find out.)

The second day started early, with our group expected to be awake, dressed packed and assembled by 6:30am. After a good breakfast in the hotel we loaded back into our vehicles and set off again. Our stops included several flamingo-filled lagoons, the red lagoon (which really is crimson red!), the “rock tree” and a few other sightseeing opportunities before retiring to a different rest stop for the evening. 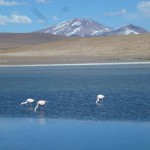 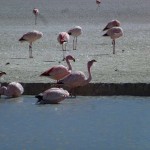 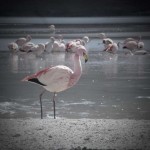 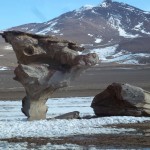 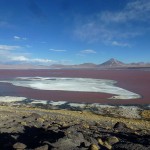 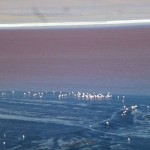 After dinner we set out again to enjoy an absolutely fantastic feature of our hotel: an outdoor bath fed by natural hot springs. As the air temperature by this time was about 1°C, Harry and I decided that the 150m walk to the springs would be best tackled in swimming trunks and nothing else.

Let me tell you: the walk down was freezing! But… sinking into a pool of perfectly clear water at 35°C was absolute bliss! To make things even better our tour group had the pool all to ourselves – whilst it would normally be very crowded, we were the only group staying at the hotel thanks to a road that was closed by snow being cleared just in time! 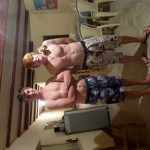 Ready to go out and freeze ourselves 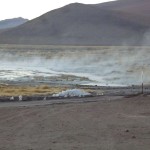 The same pool, in the morning (note the steam)

The third and final day on the tour was given mainly to the long drive back to Uyuni, with a few stops along the way at Salvador Dali Desert, a semi-active volcano, a vey nice place (the name of which I have forgotten!) for lunch and a second valley of rocks. A phrase like “the long drive back to Uyuni” sounds pretty dull, but you should remember that we were driving through a beautiful national park and incredible mountain ranges, with some in-car iPod sharing to accompany the views. 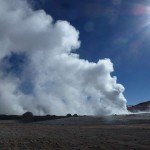 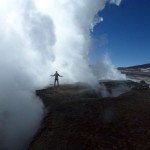 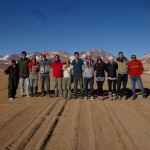 Aren’t we a pretty bunch!

We arrived back in Uyuni at around 16:15, said our goodbyes to the rest of the group, and caught an overnight bus back to La Paz, where I am staying until tomorrow afternoon (after which we fly to Rio de Janeiro).

When researching for our Uyuni trip we found that there were a thousand-and-one different operators offering expeditions on the Salar de Uyuni (the salt flats). Many providers offer different packages in different price brackets. Our tour was booked with Red Planet, via Kanoo Travel Agents. We went for one of the more expensive options – just shy of £200 for the three day tour and our busses from La Paz to Uyuni and back. I feel that the price was very good value; the main benefit of the more costly option is an English-speaking guide (very handy for gringos like me), but we also enjoyed better-than-average accommodation, very good food and a superior selection of stops and visits (I’m basing all of these comparisons on the many reviews I read about other providers).

Our tour was a fantastic experience, made so mostly by the people we shared it with. So to everyone, I offer my thanks: to our drivers, Jose and Ronald; to our guide, Oscar; and the eight friends we shared the journey with, Nico, Stephanie, Sindre, Jorinde, Flavia, Giuliano, Maiyarat and Santhis.

Posted under The Adventure and tagged with Bolivia, photos, Salar de Uyuni, The Adventure, Uyuni
Comments Off on Adventure Update #6: Uyuni